Jason Dimond asked a bunch of writers about how they deal with criticism for Flavorwire. He asked me and here’s what I said:

I’m the obsessive type. I’ll read every single review, every single email, every single rejection, every single damn Goodreads/Amazon review. I’ll read between the lines, looking for something that’s probably not there. I’ll take it personal. I’m aware of this character flaw so I steel myself and take a step back. I take it as objectively as possible. I look for a cue, something that pulls out the valuable nuggets from even the most negative criticism. I look for something constructive. If it’s not there, because it can’t always be there, I’ve got those friends and allies, those maniacs that remain at a writer’s side throughout good and bad. But ultimately, I don’t think anyone ever gets used to negative criticism. Either you grow numb or the negative undercurrent is always somewhat visible, audible, poking out from every batch of good reviews. The best anyone can do is steel up and remain objective. If not, a stiff drink and a night of friendly conversation never hurts to remind you that we’re all human and, in some way, hurting. 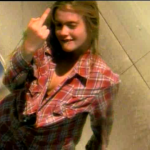 Click here for the entire article.
PS – I totally just stole that image Jason used for the article (it was too good to not steal).