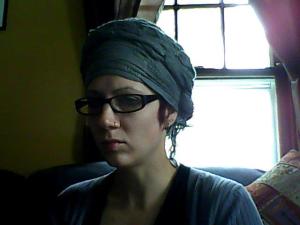 ~Always wanted to live on a boat headed nowhere, out at sea.

~Preferred the solitary seas but found it difficult to get away from people no matter how far away from the shoreline.

~Encountered numerous boats, a few commercial ships, and one cruise-line.

~Attacked by pirate ship one night despite having thought pirate ships to be extinct.

~Survived by joining pirate ranks only to murder them by night.

~Fished for sharks using bits and pieces of human body.

“Interchanging shots. Both take a knee and shake some of the water out of their clothing. Bodies dripping wet, the water making their clothes skintight. Views of everything excluding their faces. Then one last shot as both climb to their feet. Both look identical but one speaks for the other. Looking back they say, “Well that was a waste.” One answers, “It’s hard to find friends.” “But it’s easy to find killers.” One steps into the other, combining into one: the woman. The woman walks towards the audience, walks into the shot, everything going black for a moment, and then all that’s left is the view of a lake, seemingly undisturbed.”

Click here if you want to be a pirate.